Name and nature: the enigma of guai

Hexagram 43 is called 夬, guai, which is generally understood to mean‘decision’ or ‘resoluteness’ or ‘breakthrough’. The oldest forms of the character show a hand holding up an object – a token of authority, perhaps, or an archer’s thumb ring. In some early versions of the character, it’s quite clearly a drawing of a hand with a thumb ring:

Nowadays, the word for an archer’s ring is jue, 玦, formed by combining guai with the ‘jade’ radical.

The Wings (Tuanzhuan, Zagua and Xugua) agree, though, that 夬 means  jue 决: a word that combines guai with the ‘water’ radical and means decide, breakthrough, breach (of a dike), certainty, execution. This, they say, is what the solid lines of the hexagram are doing to the one broken line at the top: ‘taking decisive action’ against it (Lynn).

Translators almost all follow the wisdom of the Wings authors, because their understanding fits so naturally with the shape of the hexagram. Following its energy through from the bottom line to the top, you get the sense of a powerful upward drive, pushing out that final yin line. It feels like a single giant arrow of motion: one way only.

I wonder whether guai might originally refer to a particular kind of motion: the kind that characterises both the bowstring released by the archer’s thumb and the water that breaches a dike. Stored energy is released into swift motion – in a single direction, with momentum, and not to be diverted.

The position of this hexagram in the Sequence carries the same idea: the lake gathers under the mountain in 41, and then there is Increase, and then ‘Increasing and not reaching an end must mean breakthrough.’

(Here’s more on 43 as the ‘breakthrough’ of water breaching a dike.)

The Oracle of 43, though, seems to tell the story of an idea:

‘Deciding, tell it in the king’s chambers.
With truth, cry out, there is danger.
Notify your own town.
Fruitless to take up arms;
Fruitful to have a direction to go.’

It begins with communication: broadcast the message in the king’s chambers, truth calls out there is danger, notify the town. The word translate ‘cry out’ means to yell, or howl like the wind: ‘Truth that howls means danger!’

The message ripples outward: from the royal court to the town and beyond, into a ‘direction to go’. In this way, it translates into motion – the potent momentum of the hexagram. An idea with power behind it is carried through into action.

The Oracle finishes up with a very clear contrast: to take up arms is fruitless; to have a direction to go is fruitful. What’s the distinction it’s pointing to here? The Tuanzhuan says that taking up arms would mean what you hold in high esteem comes to nothing – which actually seems odd: with all this energy and momentum, wouldn’t you expect to win any battles you started?

In my book I only said, ‘It will serve you better to focus with clear intention on what you’re moving towards, rather than what you’re reacting against.’ I think we might add that taking up arms would be a distraction from 43’s single direction.

Lonely as a cloud

‘Lake above heaven. Deciding.
A noble one distributes riches to reach those below,
He dwells in power and virtue, and also shuns things.’

…except that there’s actually more than one way to understand that final line. Word for word in Chinese, it’s literally something like, ‘Dwelling-in virtue and/thus avoid.’ Wilhelm has, ‘he refrains from resting on his virtue;’ Lynn, following Wang Bi, has ‘dwells in virtue and so clarifies what one should be averse to.’ (Wang Bi says that to be averse to something implies to prohibit it, and this is about having very clear laws without laxity.)

What do the trigrams imply? The outer lake has to do with communicating, spreading and sharing. Heaven on the inside indicates both lasting power and unchanging truths behind this communication – probably what Wang Bi had in mind when he talked about having clear laws.

Of course, the simplest way to understand a ‘lake above heaven’ is as a cloud. A cloud distributes riches to those below. It reaches everyone, but no-one can reach it: rain water is always pure; the shores of a sky-lake never get muddy. It makes sense to me that the noble one is like this: simultaneously generous and aloof. In the line texts, it turns out that we do need a certain reserve and distance to keep going.

(In support of this – the Image of 53 has a very similar phrase, ‘the noble one dwells in good character and virtue’. No-one interprets this as lazily ‘resting on his virtue.’)

According to the Dazhuan, the hexagrams predate civilisation and inspire its greatest creations – such as the written word:

‘In remote antiquity, people knotted cords to keep things in order. The sages of later ages exchanged these for written tallies, and by means of these all the various officials were kept in order, and the myriad folk were supervised. They probably got the idea for this from the hexagram Kuai.’ (Lynn)

The idea of written tallies comes – like the image of the cloud – from the trigrams: communication (lake) that contains enduring power (heaven). As Wilhelm says, ‘words should be made strong and enduring.’ Writing infuses communication with greater power.

In this connection… it’s interesting to see the role Hexagram 43 plays in the Zagua, the ‘Miscellaneous Hexagrams’ Wing that describes contrasting pairs. At the end of this Wing, the last few hexagrams mentioned are no longer grouped with their pairs. (No-one knows why.) 43, separated from 44, is the very last of all:

‘Guai is breaking through,
Firm breaks through soft.
The noble one’s dao is long lasting,
The small man’s dao is sorrow.’

Why might this be the final word? I wonder if it’s because 43 is about words with power behind them. The Zagua is a simple little text, mostly in rhyme – I imagine it was intended to be recited out loud by a student learning the pairs. The recitation ends with something like an incantation, with the power of the whole book behind it: may the noble man’s way endure, may the small man decline.

Journey through the lines

The line texts of 43, true to its sense of direction and momentum, tell a story. Deciding – it makes clear – isn’t just theoretical: it means carrying your intention, your words-with-power-behind-them, through into action.

‘Vigour in the leading foot.
Going on without control means making mistakes.’

It’s no good to start moving too soon, before you’re capable of the task. Just declaring your intent is not enough. This line joins with Hexagram 28, Great Exceeding. Someone has such an overwhelming sense that Something Must Be Done that she falls over her own feet in her hurry to get going.

‘Alarmed, crying out.
Evening and night, bearing arms.
Do not fear.’

The ‘crying out’ from the Oracle is heard again. This line connects with 49, Radical Change. Truth howls in the dark, and we are thoroughly alarmed. (The character ‘alarm’ consists of ‘heart’ and yi, ‘change’, making it pretty clear what frightens us.) This is when we’re liable to take up arms, which the Oracle said wasn’t a good idea. Perhaps it still isn’t – at all events, better not to over-react or over-identify.

‘Vigour in the cheekbones means a pitfall.
Noble one decides, decides.
Walks alone, meets the rain,
And is indignant as if he were soaked through.
Not a mistake.’

Deciding meets Hexagram 58, Opening: it’s time to go out into the open and communicate. Line 3 asks ‘can I, should I, go out across the threshold?’ and the answer is yes. To decide now is to walk out alone, though you may end up bedraggled and sputtering. Never mind preserving your dignity: some things are more important. (You can see the reflection of this noble one in the Image.)

This is the line associated with Yu the Great, the hero whose thighs were wasted from his decades spent battling the floods. It’s the second line about how you move: alone in line 3, understandably awkwardly now.

This line joins with Hexagram 5, Waiting: the floods didn’t recede instantaneously just because Heaven said that Yu should conquer them. ‘Deciding’ can be a long-term undertaking. If things are getting on top of you, surrender to the reality of it and just keep hobbling on.

This is a hexagram of words with power, but now we reach the outer trigram, words are not trusted. I think that’s partly because it’s time for action now – words alone aren’t enough – and partly because these words come from the sidelines. LiSe sees Yu here and in line 3, getting no thanks for his labours.

‘Amaranth on high ground.
Decide, decide.
Walk in the centre, no mistake.’

A third ‘walking’ line, now with Great Vigour (Hexagram 34) – like that amaranth, perhaps, or like the energy it would take to harvest it. At line 5 – the place of personal autonomy and choice – in a hexagram about Deciding, Yi is remarkably open-ended. Decide for yourself where the middle path lies, and walk it.

‘Not crying out.
In the end, pitfall.’

If truth never cries out, there’s no deciding; nothing happens. Hexagram 1 shines through this line, bringing the necessity of creative change – but also, perhaps, a desire to keep clear of messiness, and not allow anything to go wrong. This reminds me somewhat of 55.6, and also 21.6: what if the message never got through? What if the upheaval never happened? In the short term, this might make things easier, but not in the end. 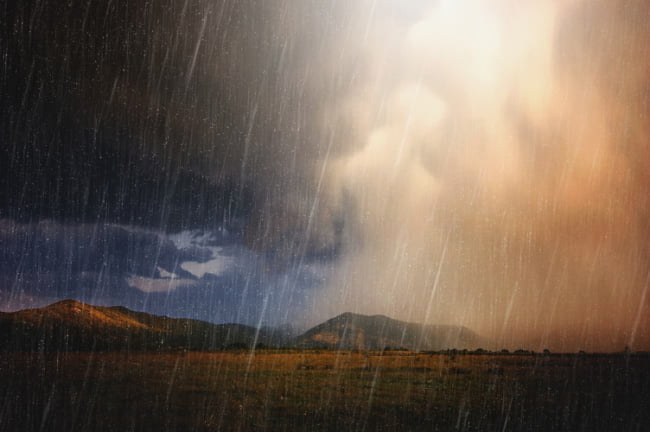