I’ve left a longer gap between posts here than I intended, mostly because March has been very full of ’cello-y things. Still, there’s a reading from one of these that cast a new light on Hexagram 31 line 3 for me, so I can at least share that with you…

The background: I’d signed up months ago for the ’Cello Day. This is a lovely occasion where a very mixed bunch of amateur ’cellists get together and are taught by a superb, kind professional. As well as group work, there is a quasi-masterclass, in which a few people volunteer to play something and get individual feedback. Thoroughly scary, but a rare opportunity; I signed up, and had been working on the piece I wanted to play since Christmas.

And… then I learned that there would be no pianist available. What I wanted to play was very much a duet with the piano, so that the ’cello part on its own would sound very lonely and a bit daft. Should I persist with that, or switch to some solo Bach (for ’cello alone)? I prepared both, dithered and divined about which to play, and didn’t actually decide until the day to go with Bach.

So that’s why I have a reading in my journal titled, ‘Just Bach?’ Yi answered with 31, Influence, changing at line 3 to 45, Gathering.

A smidgen more background: I was playing the prelude to the D minor suite, which is an intensely emotional piece: I can’t play it without being moved – not even performing in front of a group, where I’d normally be too scared to be aware of anything much else. So you can see the Hexagram-31-ness of the moment in that. (The 45 is a combination of the setting, the amount of time I’d spent preparing, all I’d learned earlier in the day and wanted to integrate… which all meant I was emotionally invested in more ways than one.)

‘Influence in your thighs,
Holding on to your following
Going on, shame.’

It’s an odd, awkward line, about being pulled in opposite directions. (Aside: so are some other third lines in the mountain trigram – think of 52.3, or 33.3.) ‘Influence in your thighs’ suggests that your legs are walking you. You see something you want and your legs carry you towards it automatically. Or in my case, the music was ‘playing itself’ and my hands were following.

And then at the same time I was trying to be mindful of what I’d learned that morning about how to create a good sound. The teacher had spent a long time with us breaking down what we did automatically, so that each tiny component part was brought into consciousness and we became aware of the difference it made.

Anyway… for the most part, I played OK – except when, sometimes, I made an unpleasantly forced sound. The teacher (bless him) observed that ‘mostly’ the sound was nice and free – and when it wasn’t, that was because my shoulder was ‘locking’. I think I know what he means: I’m still moving the bow, but against the resistance of my own muscle tension.

Why? Because part of me’s moving more or less automatically, and part of me’s trying to exert conscious control over those automatic habits, to ‘hold onto my following’. I can do that with one note and nothing else to think about – but not so much mid-performance.

Back to Yi’s image: you might walk mindfully, making every movement fully intentional, if you went slowly enough. But if you tried to achieve the same level of control while racing down a hill (after a cheese, for instance), it’s safe to assume you’d fall flat on your face. We can have automatic processes moved by emotion, or conscious control, but if we try for both at once we tie ourselves in a giant knot.

Looking at the line this way gives me a different perspective on it. There isn’t necessarily anything wrong with the ‘influence in your thighs’, nor yet with the ‘holding on’: it’s the combination that has you falling over your feet. Hence, a wise response to the line isn’t necessarily going to mean either ‘getting a grip’ or ‘letting go’: it might just mean becoming better integrated. (Practising good bowing technique, for instance, until it becomes habitual and unconscious.) 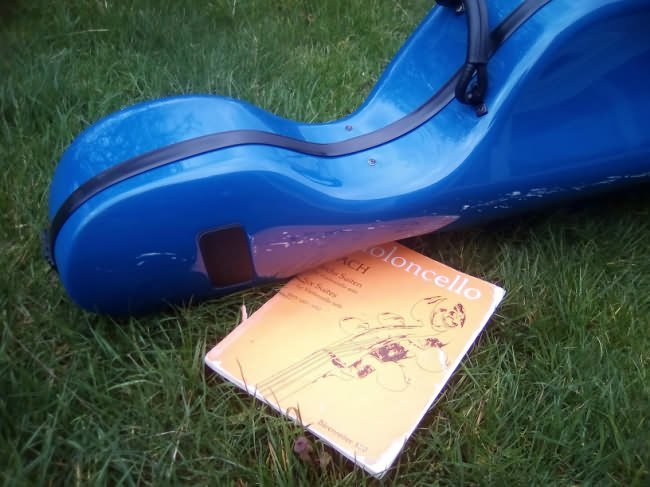 (You can listen to the Bach here.)

4 responses to A ‘cello-related reading