Looking simply at the shape of hexagram 33 with a naïve, imaginative eye…

…we might see the entrance to a cave. And if you look at the picture painted by the trigrams, heaven above the mountain, then it conjures up the idea of a hermit who Retreats to the mountain-top.

All this is part of the meaning of the hexagram, but its Chinese name is more down-to-earth:

As LiSe explains, this shows the way a piglet, meant for dinner, would move – presumably, away from the people who want to eat it.

Naturally, there’s a school of thought that makes the whole hexagram all about the piglet: from its tail at line 1 to the whole hog roast by line 5. There is, I think, a bit more to Retreat than that. For one thing, I find it most helpful to identify with the pig: when I receive this one I’d ask myself, ‘What wants to eat me?’ (maybe worry, or distractions, or the never-ending to-do list) and concentrate first on getting out of its reach.

As the ever-practical authors of the Image wrote, this is going to mean ‘keeping small people at a distance’:

‘Below heaven is the mountain. Retreat.
A noble one keeps small people at a distance,
Not with hatred, but through respect.’

Naturally, the small people can be internal as well as external – either way, we need to create enough distance to have a clear space to be ourselves. And as long as we’re hating or resenting or pushing away, of course, there’s no distance at all. Wilhelm captured this when he wrote, ‘Hatred is a form of subjective involvement by which we are bound to the hated object.’

For another perspective on what to retreat from, we could look at the Sequence. Hexagram 33 follows from 32, Lasting.

(An aside: Stephen Karcher came up with the idea of the ‘Shadow hexagram’. In a nutshell, this represents exactly how not to think about the cast hexagram, and is found by counting backwards from Hexagram 64 to the number of your hexagram. That is, 64 is the shadow of 1, 63 is the shadow of 2, and so on.

Well… 32 and 33 are the exact numerical centre of the book, so Hexagram ‘minus 33’ is actually 32: Lasting is the shadow of Retreat. To me that suggests a stronger sense than is usual in the Sequence of don’t stay there – move on from this.)

The Xugua – the Wing dedicated to the Sequence – says,

‘They cannot last long in the place where they settle, and so retreat follows. Retreat means withdrawing.’

This is a bit odd. Shouldn’t Lasting – well – last? This is where we take the Influence of Hexagram 31 and weave it into the fabric of our lives: where love becomes marriage, insight translates into practice, and omens are fixed. Customs and practices turn into the stuff of life, into identity. The nuclear hexagram of 32 is 43: Deciding, the messenger holding up the token of authority, ‘Here I am, this is me, here is what I have to say.’

(Also, the nuclear hexagram of 33 is 44 – the irruption of everything unpredictable that won’t be contained in marriage. Those who retreat might be visited by Muses, angels or devils.)

Constancy, in Lasting, brings harvest; constancy in Retreat yields only a small one. After all, Retreat isn’t about harvest. A fleeing piglet isn’t trying to collect trophies, and nor is a retreating army; they’re concentrating on staying in one piece. It might be similar for the hermit disappearing into her cave.

However, it’s not no harvest, just a small one, and Retreat – just like Lasting – is a way of ‘creating success’ – of successful creative engagement with the world.

Hexagram 33 isn’t only about getting away from whatever (or whoever) wants to eat you – it’s also about what you retreat to. Or to put this another way, it’s not about getting away from all your relationships, becoming a misanthropic recluse, but about transforming them. The hermit on his way up the mountain looks to be leaving the world behind, but is really also joining a larger whole.

At the top of the mountain

Perhaps the key turning point comes at the top of the mountain, at 33.3 – which is really the hardest point, when the sky seems further away than ever (33.3 changes to 12)

Lines 3 and 4 make up the hexagram’s human realm, sandwiched between two ‘earth’ lines’ below and two ‘heaven’ lines above. Tied retreat: your human nature (and bonds, and needs) might pull you back, might haunt you with feverish anxiety. Or… they might become helpers, a store of strength that enables you to break free.

To unpack that a little…

‘Tied’ is 係, xi. It means to be connected, related, or even part of a lineage; etymologically, the character is made of ‘person’ and ‘hand drawing out silk threads’. Not captivity – simply ties.

‘Affliction’ (疾 ji) is a person struck by an arrow – suffering, illness, and also haste, going too fast. ‘Danger’ (厲 li) is the scorpion under the rock, also perhaps associated with angry ghosts. All excruciatingly anxious and insecure.

‘Nurturing’, xu, is a resonant word in the Yi: the name of hexagrams 9 and 26 (Small and Great Taming). Hexagram 26 is also formed of the trigrams mountain and heaven, and at the mid-point between 25-26 and 33-34 stand 29-30, where Clarity is sustained by ‘nurturing female cattle’. So ‘nurturing’ here – its final appearance in the book – has powerful echoes. (For more on this set of 10 hexagrams – and the whole idea of seeing readings through the lens of bigger arcs in the Sequence – see the Sequence article in the Wiki. Also, part 1 of the Sequence course will be available inside Change Circle very soon!)

If you shift your perspective on 33.3 to find its paired line –

(OK, the simpler way to describe that is to say ‘turn the hexagram upside-down’, but it makes more sense to me to think of it as changing your own perspective)

– then you find yourself looking at 34.4, in which the cart breaks through the hedge thanks to the power stored up in its smallest component, the axle straps.

And also this line reminds me of another ‘mountaintop’, 41.6, where you ‘gain a servant, not a home’ – and the point there, surely, is that a home is static but a servant can move with you and help you to move. You can’t settle, and so you retreat – and your connected, human nature can help.

So… where are you retreating to? Up above the mountain, into loving retreat, praiseworthy retreat, rich retreat – not into misanthropy, and certainly not deprivation. When Retreat joins again with the inspiration of Hexagram 31 at line 6, its ‘small harvest’ is enough to make you rich.

Overall… I think Retreat has the sense of retreating into something bigger, submerging and hiding yourself within it. (Maybe a similar idea to ‘hiding’ as in Psalms 31:20 and 32:7?)

There are a few different sources that give me that sense of it: both the shape of the and its texts. To start with the trigrams: you reach the top of the mountain at line 3, and keep going, into the skies. And then… this is one of the dabagua (‘great trigram’) hexagrams, meaning it takes the shape of a trigram with each line individually doubled. 33

is formed by individually doubling each line of the trigram xun

whose action is to penetrate into things like wind or roots. Dabagua hexagrams have the qualities of their trigram magnified. Hexagram 34 is dabagua dui, the communicative lake writ large, and looks like a megaphone; Hexagram 33 seems to be a way of Retreating into the very nature of things and hiding yourself there.

And the Tuanzhuan, the Commentary on the Judgement, says of ‘constancy bears small fruit,’ ‘penetrating, and hence long-lasting.’ The word ‘penetrating’ means soaking in, permeating, like water. A conventional view of this would be to say that only small fruit is available because the evil yin lines are encroaching on the yang, so everything is going wrong – albeit only slowly. I don’t find the ‘beginning of the end’ interpretation very persuasive, but I can readily imagine the movement of yin into yang as like water soaking into the earth. That would be the perfect retreat: your nature unchanged, but nonetheless becoming invisible, indistinguishable from the whole.

(This shows how Retreat is quite different from Hiding Brightness, Hexagram 36. Prince Ji doesn’t disappear into the mountains: he keeps his light shining at court, clear and distinct from hostile surroundings.)

I’ve had Hexagram 33 invite me to retreat from the treadmill of work habits and into awareness, and also to retreat from the room with my little brother in it (and from my own short temper!). 33 changing to 27 described retreating from one’s own ideas and judgements and into the substance of the reading when interpreting for another person. 33 unchanging described the benefits of using brain.fm – putting on headphones and listening to focus-inducing audio – to retreat from distractions that devour my attention. (I think that one’s unchanging because brain.fm can’t do anything about what I decide to retreat to.) 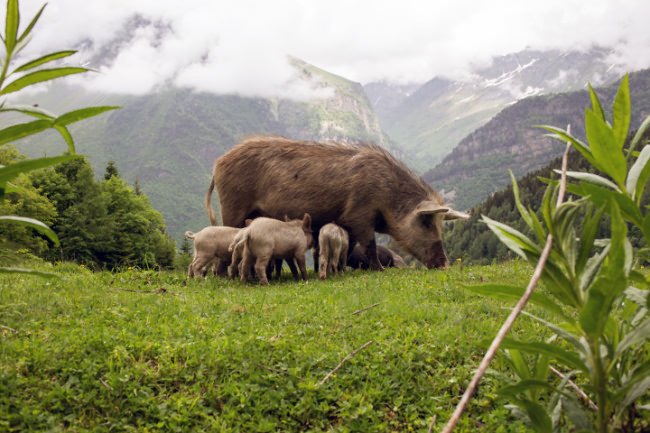