Hexagram 52 is called gen, 艮, and so too is the trigram that’s doubled to make the hexagram. It translates as ‘looking away’: in the ancient character, you can see a reversed human figure with a great eye. Nowadays, it apparently also translates as ‘tough, hard to chew’ – something that resists.

The trigram gen is known as ‘mountain’ – you can see why from its shape – and primarily means stopping. The hexagram’s formed of two mountains, and looks to me as if it’s divided into two separate boxes.

Name and structure merge into the hexagram’s spectrum of meaning: its core stance is not to respond, relate or react – not to be moved. Sometimes this looks like obstinacy, sometimes like the stillness of meditation.

Stilling – not a mistake

‘Stilling your back,
Not grasping your self.
Moving in your rooms,
Not seeing your people.
Not a mistake.’

As so often when Yi says something is ‘not a mistake’, it’s describing something we tend automatically to think must be a mistake. Surely as good, sensitive social beings we should always be self-aware, and always attuned to other people – especially those in our own homes? No, says Yi, not always: now, it’s OK not to grasp your self or see your people.

The old character for ‘grasp’ has to do with hunting dogs, so this means not trying to hunt down and capture yourself. I think of this mostly as not being self-conscious – not chasing down and second-guessing every thought. (Who else has had the experience of trying to meditate and ending up thinking about how they’re thinking about how they’re thinking?) Not every reaction has to be monitored. Make your back still – of course, your back will hold still quite naturally, especially if you stop trying to turn round and look at it.

Move in your rooms without seeing or meeting with your people. Early Chinese commentators, starting with Wang Bi, saw this as people with their backs turned, unaware of one another and hence blamelessly free from the desire to meet. You don’t desire what you can’t see – and hence you don’t have to impose forcible restraint, which would give rise to evil. This reminds me irresistibly of the wisdom, for me, of not having cake in the house: when it’s there, it calls my name all the time. Out of sight, out of mind.

In RJ Lynn’s wonderful I Ching, I learn that Wang Bi thinks the hexagram begins with ‘not grasping the other person’; Cheng Yi thinks it’s not grasping your self. Either way, the idea is to keep your back turned so as to ‘arrest the emotional response to things, prevent the workings of desire’ (Kong Yingda).

To this I’d add that this is not only about arresting desire, but all emotional reaction, also preventing the workings of anger, shock, fear, and – not least – social anxiety: that need constantly to rethink everything in the light of how other people might react. The ‘rooms’ in question, where we can safely not see people, can be inner as well as outer.

This brings us back to the shape of the hexagram: inner and outer mountains, defining their separate spaces. The authors of the Tuanzhuan, Commentary on the Judgement, also seem to have had the sense that the hexagram was divided in two: ‘Those above and those below are in opposition,’ they wrote of the lines, ‘and have nothing in common.’ (Wilhelm/Baynes)

Ostensibly, this refers to the lack of correspondence between the equivalent lines in the two trigrams (1 with 4, 2 with 5, 3 with 6): yang lines correspond with yin ones; two yang or two yin lines do not correspond, so that with two identical mountain trigrams, no two lines correspond. Only, of course, this is equally true for all eight hexagrams made of a doubled trigram, but only mentioned for this one.

The power of Stilling

Hexagram 52 follows from, and is paired with, Hexagram 51, Shock. This is an inverse pair, meaning there is really only one pattern of lines here – it’s just that we change our perspective, and look at it first from one end, then the other:

In fact, you can see Hexagram 52 present already in the Oracle of 51:

The officiant who doesn’t lose the sacred ladle or libation amidst all the panic is already Keeping Still. (There are other hexagram pairs where one contains or implies the other, but this might be the clearest example.)

‘Things cannot end with stirring up; stop them.’

Hexagram 51 stirs  everything up and sends out ripples and aftershocks. It sets things in motion, but it’s the beginning, not the completion. To recover from a great shock, you also need to stop. I once read that counselling urging people to confront a trauma explicitly, immediately after the experience, actually hindered their recovery. It’s no mistake for 52 to follow 51; blocking things out is fine.

A constant state of excitation doesn’t go anywhere or complete anything, like a heart in fibrillation can’t pump efficiently. Motion has to be balanced with stillness. Also, you can’t change direction without stopping first to recover your balance.

So it seems the purpose of stopping is to find a course that’s bright and clear. Often in the Yijing Sequence, upheaval and chaotic change is a prelude to greater balance – something that will endure. (Think of 49/50, or 59/60.)

In this particular part of the Sequence, processing change and finding stability is especially important. Hexagram 49 reminds us of the overthrow of the centuries-old Shang dynasty; Hexagram 50, the Vessel, founds the new. 51 and 52 are processing this change; in the same way, the doubled trigrams of 57/58 are processing the drama at Feng and Yi in hexagrams 55 and 56.

In the dramatic change from Shang to Zhou rule, there was also continuity: intermarriage between the two families meant that the Zhou could continue the Shang ancestral offerings – not losing the sacred ladle or libation. Maybe after an intense period of following their mandate – celestial guidance and fated victories – they had an especially strong need to hold fast to what was sacred and keep still.

The inner potential of Stilling

I’ve mentioned how the two trigrams of Hexagram 52 don’t relate to one another. But the Image paints a different picture:

‘Joined mountains. Stilling.
A noble one reflects, and does not come forth from his situation.’

Not just two mountains, but joined mountains. Inner stillness joins with outer stillness: quietly reflecting, and staying put. ‘Coming forth’ is the action of the trigram zhen, Shock – Hexagram 51’s doubled trigram. 52 reflects, and doesn’t seize the initiative and try to create change.

Here’s an intriguing connection: the character ‘joined’ is jian, 兼 , the phonetic component of the name of Hexagram 15, 謙 : Integrity. You can see the thematic link: to have Integrity is to hold together with truth;  that’s the action of a meditator, resting in awareness, holding together with the present moment and not ‘coming forth from his situation’.

And there’s also a structural link: Hexagram 15 differs from 52 only in its sixth line, which means they share a nuclear hexagram: 40, Release. The nuclear can be seen as the ‘seed’ contained inside the original hexagram, like hexagram DNA. So Integrity is one way of bringing Release to expression, and Stilling is another. To be able to move freely, choosing your own direction, you first need to become wholly still. 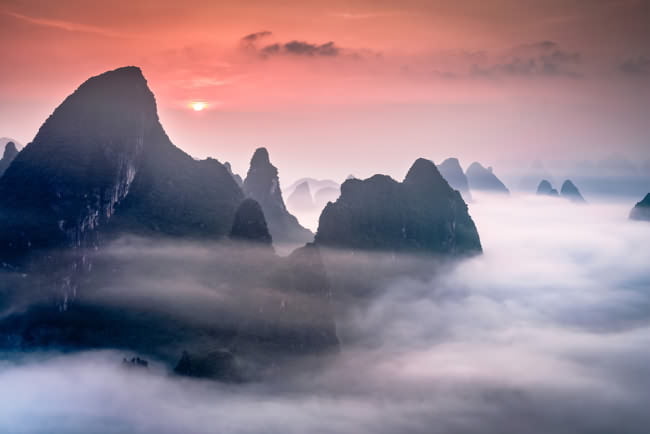