‘An invention in the same sense that Newton invented gravity’
(Cyrille Javary, describing the discovery of the trigrams)

Before you get started on casting your own Yijing reading, it’ll really help to familiarise yourself with trigrams. Partly just because when you cast a hexagram, you’ll be using its two component trigrams to look it up. But also because trigrams are part of interpretation – the two trigrams that make up each hexagram tell you something about its meaning – and you already know them.

You may or may not know the three-line ‘pictures’, but you’re perfectly familiar with what they represent: sky and earth, thunder and mountain, water and fire, lake and wind. Trigrams are like the primary colours used to paint a hexagram (just pretend for a moment there are 8 primary colours!). Here they are – the Yijing’s paint box: That diagram’s called a bagua, 八卦 . ‘Ba’八 means ‘eight’ and ‘gua’ 卦 means ‘figures’ or ‘images’ for divination. It’s the Chinese character we translate as both ‘trigram’ and ‘hexagram’; its early form includes the character for ‘divination’,  卜 , representing cracks made in bone or turtle shell in the old way of divining. (LiSe Heyboer brings the whole character to life in From Gui to Gua.)

Here’s an excerpt straight from the I Ching Foundations Course: 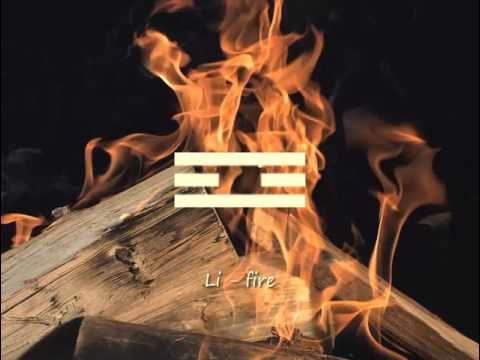 (The complete ‘trigrams’ module of the Foundations Course goes on to share some examples and describe how to recognise trigrams in human behaviour – but that’s for later.)

Next: trigrams in hexagrams

Use this form to send me your name and email, and you’ll get an email straight back with the subject line, “Please confirm you want to receive ‘Ways of Opening’”.

Click the confirmation link, I’ll send you the ‘Ways of Opening’ workbook, and I’ll be in touch as soon as I open for readings.

Your information will never be shared or sold
Clarity uses cookies to make this website work.     Find out more, or