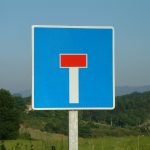 ‘Not yet across, creating success.
The small fox, almost across,
Soaks its tail:
No direction bears fruit.’
Click to expand...

‘The basic meaning: no goal you set under these circumstances will help. No amount of planning and intending, no purposeful action, will get you out of this.’
Click to expand...

This is quite distinct from a simple ‘pitfall’ or ‘disaster’: it may not be bad now (it could be ‘sweetness nearing’, after all), but it isn’t going anywhere; nothing good can come of it.

Only… is there more to it?

The Chinese phrase is 无攸利, wu you li, ‘no place fruitful’. It’s 攸, you, that’s the tricky part. It means ‘place’ and also ‘distant, far’, and also ‘there’ or just ‘that which, the one who’ – making 无攸利 mean simply ‘not that which bears fruit’ – not the kind of thing that yields results.

However, the more specific meaning of ‘far distant’ seems to be the older one. The character shows a man using a pole to ford a river, which seems to lend credence to that, and when Harmen wrote about the character back in 2005 he opted for a translation of ‘far away’ or ‘the border regions’. So a 攸往 you wang, a ‘you going’, becomes a ‘journey to the border regions’, and 無攸利 becomes ‘no profit from the border regions’ – or more generally, aiming for a far distant place is no use.

Could it be fruitful to be without direction?​

And then there is another way we might understand the whole phrase: it could be saying that there is no useful direction, or that far places are no use, but might it also be saying that with no direction, if you avoid the distant places, then this does bear fruit?

The entry in Language of Change continues,

‘But there is also a secondary meaning that might sometimes apply: perhaps being without a direction might in itself bear fruit. It’s worth trying a thought experiment to see how the situation would look if you had no agenda: ‘If I saw a stranger in this situation, how would I advise her?’ Free from the constraints of an original intent, your intuition might engage more directly and spontaneously with the changing reality.’
Click to expand...

Looking back on this, I think ‘might sometimes apply’ is about right: I wouldn’t want anyone to be distracted from the resounding ‘nope, there is nothing remotely useful about this’ message. Still… it can be a useful idea…

‘The ram butts the hedge.
Cannot pull back, cannot follow through,
No direction bears fruit.
Hardship, and hence good fortune.’
Click to expand...

This is my favourite example, as it’s so vividly clear. It’s not hard to imagine the ram caught in the hedge, and not hard to relate to the kind of situation where you’ve charged in headlong with Great Vigour and now find you can neither make progress nor back out. Neither direction, forwards nor back, will bear fruit.

Could this be about a ‘far place’? I think it could. Maybe the ram was just attacking the hedge for its own sake, but then again, maybe he was mostly focussed on his plans for the ewes in the next field. Looking through there now isn’t going to help him at all with the immediate problem.

What will it take to disentangle the poor silly creature? Certainly not choosing a destination and aiming for it. Bradford Hatcher enjoyed himself with this one:

‘Even when his horns become hooks he will not be inclined to pause and ponder the problems, or the curve of his horns. He will not be free until he, or the shepherd, or maybe the predator, turns his head around. He can do this indirectly by trying different perspectives, or seeing things from new angles, or questioning old directions, or simply pausing to have a quick look around. Sometimes to find the objective one needs to drop the objective and bring out those other dimensions.’
Click to expand...

‘Not yet across, creating success.
The small fox, almost across,
Soaks its tail:
No direction bears fruit.’
Click to expand...

Another animal story, and the fox may be stuck in a similar way to the ram. There have been cases of foxes crossing frozen rivers getting trapped when their soaked brush freezes onto the ice. The fox is like the ram: it needs to concentrate on navigating the immediate present. If it gets stuck to this ice floe, all its plans for the other side of the river will be moot.

This is one instance where I think ‘no direction bears fruit’ does mean ‘to have no direction is fruitful’: attune your ears, paws and whiskers to your next step, and you can make it across the river.

‘Marrying maiden. To set out to bring order: pitfall.
No direction is fruitful.’
Click to expand...

For the marrying maiden, to set out to bring order – to try to organise things her way as if with military force – would be disastrous; more than that, any kind of long-range plan is useless.

Again, not looking too far ahead might bear fruit. The first wife might be childless; a junior wife might become mother to the heir. However, that’s not something she can plan for or count on. All she can do is to feel her way in, attuning herself fully to the currents and vibrations of her changing circumstances, as the reverberations of the thunder are felt through the lake.

In practice, though, if you ask ‘What about doing the thing?’ and receive Hexagram 54 unchanging, it’s not a good idea to jump into asking how being without direction could bear fruit – better not to count on anything you have in mind bearing fruit at all. It would be more sensible altogether just not to do the thing.

Continuing the theme of ‘this just isn’t going anywhere’…

‘Constancy, pitfall’ reinforces the message, there’s no future in this. Making this your guiding principle is disastrous; this is no kind of starting point for anything. Rejecting nourishment, you take yourself out of commission, out of circulation (sometimes – zhi 22 – for the sake of preserving an image instead) – exactly the opposite of the moment-to-moment awareness of a wise fox.

Another line that combines ‘no direction bears fruit’ with ‘constancy, pitfall’. This one, rather like the ram, is getting into something that’ll be very hard to get out of. Again, it makes most sense to try to avoid this altogether if you can.

The trouble is, situations with no fruitful direction can look inviting. We dive headlong into 32.1, or enjoy the purity of 27.3’s ultra-restrictive diet, or follow our sweet tooth. Better, says 19.3, to put this behind you now.

Actually, I’ve found this line is often about being particularly sweet – the unfailingly mature one who can overlook all kinds of wrongs for the sake of the bigger picture and greater flow (zhi 11), knowing that it’s all meant to unfold smoothly. Once again, the line suggests bringing attention back to present reality, not looking past it.

‘The woman offers a basket with no contents.
The gentleman sacrifices a goat with no blood.
No direction bears fruit.’
Click to expand...

‘Don’t take this woman.
Sees a man of bronze,
And there is no self.
No direction bears fruit.’
Click to expand...

‘No direction bears fruit’ is specifically about future trajectories – not just what this will be, but where it can go. So it makes sense for it to show up as a bad marriage omen: marriage is (or should be) a starting point. Receiving one of these lines, you might think there could still be ways to make this thing work; you’d be wrong. A case, perhaps, of ‘When someone shows you who they are, believe them the first time,’ or at all events a warning not to ignore the signs.

This gathering really is inviting. So often this line shows up for someone in love (zhi 31) who keeps looking for ways to give more to the relationship, deepen its significance, find a sense of shared purpose – and the more she does, the more painful it all gets. So this ‘no direction bears fruit’ is another clear ‘no, you can’t make this work.’

So how come ‘going on’ is ‘no mistake’? I think the idea is to keep putting one foot in front of the other without trying to find a route to the promised land. Just go one step at a time and see what happens: that’s the best you can do, and despite the small humiliation, there’s nothing wrong with that.

‘No direction bears fruit’ here is a call back to the present moment. The final line of Hexagram 25 has taken Not Entangling to an extreme, disengaging from all issues, disowning all responsibility, utterly disconnected from the situation. That makes it impossible to act without blunder; no direction can bear fruit.

…starts to emerge from this directionless tour. If no direction will bear fruit, if you can’t plan, explore or think constructively, then what can you do? You can improvise and respond, moment to moment, where you are now. Let the situation rewrite your plans.

It all seems to be a question of where you focus. (Actually, this reminds me of the way I can be looking for something in the distance and almost poke my eye out on the fencepost / branch / pitchfork that’s right in front of me. Am I the only one who does this?) If no direction bears fruit, it’s time to bring your attention back to the immediate situation. Never mind the ewes in the next field, or any possible future: where are you now?

Sometimes the emphasis will be on, ‘Never mind those possible futures – they aren’t.’ Sometimes it’s more, ‘You’re looking past the present into the future, and it’ll be fruitful for you to stop that and concentrate on where you are instead.’ There’s nothing for you in the far places; better notice what’s near at hand.
Last edited: Jun 17, 2022
You must log in or register to reply here.
Share:
Facebook Twitter Reddit Pinterest Tumblr WhatsApp Email Share Link