The genius of the Daxiang (part 1) 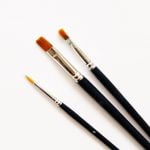 Sometimes we explain things to ourselves by comparing and contrasting – like the Zagua. Sometimes we tell stories, like the Xugua (Sequence of Hexagrams). And often, we paint mental pictures. The Yi is overflowing with pictures, of course – not least the ones created by its component trigrams. This is where the Daxiang, the ‘Great Image’, comes in.

We can all understand hexagrams in terms of their component trigrams, but the authors of the Daxiang were masters of this – especially of reading the trigrams as a relationship. I think it was Wilhelm who started a tradition of giving the Image equal billing with the original Zhouyi text (the Oracle/ Judgement and moving lines), and he had good reason. I think this is the most original and substantial of the Wings.

The format for the Image is simple: it names the component trigrams, and the hexagram, and then reads the trigrams as action – the ideal way to respond to such energy, or to embody it. Sometimes there will be a hint, in the way it describes the trigrams, of the relationship the authors were seeing there: ‘Joined mountains, Stilling’; ‘Thunder bursts forth from the earth, Enthusiasm’; ‘Earth’s centre gives birth to wood.’ These are worth noticing!

The protagonist of the Image is normally the junzi – literally, the ‘noble young one’, not only a ‘noble man’ but also an ideally responsive learner. Then there are seven Images that instead feature the ‘ancient kings’, who not only find the best response in the moment, but also bequeath us their wise, harmonious patterns for living. And there are two with the ‘prince’, one with the ‘great person’, and one with ‘those above’. (There must be a very good reason for each of these choices, but I’ve yet to grasp most of them.)

The intriguing, unspoken part of the Image is how each trigram picture translates into that ideal action. Some examples…

‘At the centre of the lake is thunder. Following.
A noble one at nightfall
Goes inside for renewal and rest.’
Click to expand...

Why would thunder at the centre of the lake be ‘Following’?

I’ve come across two basic approaches to this. Wilhelm says that this is ‘thunder in its winter rest,’ and hence, ‘the idea of following in the sense of adaptation to the demands of the time grows out of this image.’ This reminds me of the story of the Chinese dragon over-wintering at the bottom of the mountain lake, before it soars out in Spring and brings rain. Thunder at the heart of the lake is resting, and so too does the noble one.

‘This is the image of how the activation of delight takes place. When all follow one with delight, one can then practice wuwei towards them and not let them belabor one’s bright mirror. Thus “the noble one when faced with evening goes in to rest and leisure.”’

Bradford Hatcher has a much more satisfying understanding: thunder’s ‘movement under the surface’ is like a pulse, setting the rhythm for outward action, and for rest.

(Thunder as outer trigram typically looks like action and initiative. Inside, though, it can be more like this inner clock – think of hexagrams 24 and 25, and maybe also 27 and 3.)

‘Thunder and lightning culminate as one. Abundance.
A noble one decides legal proceedings and brings about punishment.’
Click to expand...

Fire and light inside, thunder outside – but the Image doesn’t pause to mention that; it only says that they ‘culminate as one’, or simply ‘arrive together’. We know what that means: the storm is right on top of you now – an ‘abundance’ of light, noise and downpour.

For the noble one, inner clarity is translating into outward action. Like all the legal imagery, this can be tricky for us to relate to. It helps to think of courts in their simplest, idealised function: to perceive the truth and act on it. Here, insight results in consequences; in Hexagram 21, with the trigrams swapped, it’s the other way about.

‘Centre of the earth gives birth to wood. Pushing upward.
A noble one with docile character,
Builds up small things to attain the high and great.’
Click to expand...

This is a picture immediately understandable to anyone who’s ever planted a seed in the ground. For weeks or even months, as far as you can see, nothing happens. The wise farmer will go along with this patiently, knowing the seedling grows by increments, roots first. (I once planted an acorn that had fallen on the pavement. The root was coming out of the bottom of the pot long before the shoot appeared.) Natural growth doesn’t skip steps.

‘Wind moves above the stream. Dispersing.
The ancient kings made offerings to the Highest and established the temples.’
Click to expand...

Wind over water suggests the steam rising from the sacred vessel, nourishing the spirits. Dispersing’s trigram picture captures it in the moment of evaporation, just as it becomes the offering.

This is one of my favourite Images, because it tells us that the ancient temples were built not with rocks, but with wind and water (feng and shui). It tells us as succinctly as possible that what lasts is whatever moves and joins with the flow. (These ancient kings could have taught Ozymandias a few things.)

The Image doesn’t just recap the original Zhouyi; it builds on it. If the Oracle text leaves you wondering, ‘What could this look like?’ the Image will probably have an answer. It humanises, and often re-imagines. More examples…

The Image has a creative response to the pure negation of the Oracle for Stripping Away:

‘Stripping away.
Fruitless to have a direction to go.’

Yes, this is a political analysis: to keep the lower classes quiet, those above – who ‘rest on’ them – need to provide. But more profoundly, it’s re-imagining the ‘energy diagram’ of the hexagram, where the last yang line is being pushed out by rising yin, stripping away the last of purpose and direction. This can be a picture of mountains eroding, pouring mineral-rich soil into the valley year after year – and the mountains aren’t panicking about this, or planning how to put a stop to it. And so we’re given the insight that willing participation in stripping away creates tranquility.

‘Radical change.
On your own day, there is truth and confidence.
Creating success from the source, constancy bears fruit.
Regrets vanish.’
Click to expand...

So says the Oracle of Hexagram 49, but how will you know when it’s your own day?

‘In the centre of the lake there is fire. Radical Change.
A noble one calculates the heavenly signs and clarifies the seasons.’
Click to expand...

This one’s less of a picture, I think, and more like an ‘energy diagram’. Inner awareness shines through the lake of interactions and all social existence. (We’re only one line away from Hexagram 17, with the pulse of thunder at the heart of the lake.) Or… the light of the stars is set at the heart of the calendar that runs society. This was one of a new king’s most important duties: to have the calendar rectified through astronomical observation, and bring the human world back into harmony with heaven.

‘Release. The southwest is fruitful.
With no place to go,
To turn round and come back is good fortune.
With a direction to go,
Daybreak, good fortune.’
Click to expand...

In case we miss the point of that deceptively-simple Oracle text, the Image of Release shows us a specific way this freedom of choice can manifest in human terms:

‘Thunder and rain do their work. Release.
A noble one pardons transgressions and forgives crimes.’
Click to expand...

This is another that’s immediately relatable: we know what the atmosphere feels like before and after a thunderstorm. Pardoning transgressions, forgiving crimes, the noble one joins in the work of relieving tension and clearing the air.

Among all the examples I could have picked, I couldn’t omit this one. It’s another favourite of mine.

This is more complicated than most Images – and much more ‘energy diagram’ than picture, as you can’t very well picture energy within matter. You have to imagine the communication of heaven and earth – the yang energy flowing up freely into the open yin lines above.

Maybe this one features the prince instead of the noble one because of its remoteness and sheer scale: working directly with the powers of heaven and earth isn’t an everyday idea for most of us. (What works for me is the anachronistic idea of the prince setting up hydro-electric power plants where the river pours down the mountainside.)

But let me show you what I love about this one. Here’s the name of the whole hexagram, Tai, the name of a sacred mountain: 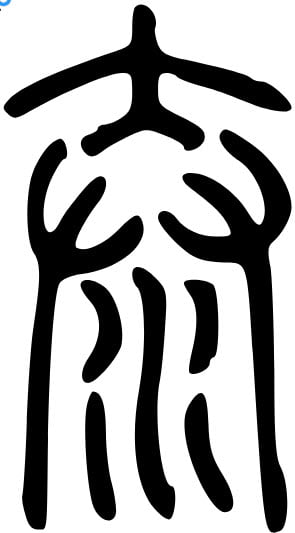 At the top is da, ‘great’, a human figure standing firm. Below that is flowing water, flanked by two hands. LiSe pointed out that the whole looks a lot like a mountain with a river flowing down it.

And here are the two characters for what the prince does for the people, zuo ‘support’ and you ‘protect’:


As well as ‘support’ and ‘protect’, they also mean ‘left hand’ and ‘right hand’. So the Image authors here have unpacked the name of the hexagram itself to bring out its human element, showing where we come in.
T