Its name (and nature)

Hexagram 55 is unusual in that its name contains two meanings –

Sears says the additions to the character are drummers; others say they are grain stalks. (Probably the character was written both ways.) We get the impression of a peak moment and a thundering great celebration.

And… Feng is also the name of a city founded by King Wen as part of his preparations to overthrow the Shang. This would be where they made plans, gathered resources, enlisted allies and watched the skies for signs of the auspicious moment to march out. They would also have been based there when Wen died and Wu succeeded him as king.

SJ Marshall was, as far as I know, the first to point this out and see its relevance to the hexagram, in his seminal book The Mandate of Heaven. He’s generously made the digital version of this available for free – highly recommended.

The details of exactly what happened at Feng – when and how Wu succeeded Wen, and what kind of celestial sign announced the time to march on Shang – are debated, and unknowable. It’s more important to understand that this is where it all happens. As the Zagua says, Abundance means ‘many causes’ or ‘much incident’. All roads lead here; everything led up to this; everything is centred here, ready for you to act. Here and now, this is the crux.

Looking through my own ‘Abundance’ readings, there are several about having to act as the leader in complicated group situation (whether I wanted the role or not). There’s an intriguing one about someone rethinking and rewriting their memories to support a healthier sense of self in the present moment. And there are two about all-in-one organiser apps – the kind where you gather all your emails, projects, to-dos, files and so forth in one place. All the readings have in common that sense of being at the centre, where you connect everything together and make it meaningful.

‘Abundance [Feng], creating success.
The king is present to it.
Do not mourn. A fitting sacrifice at noon.’

As Marshall points out, this recalls the story of Wu, who has no time fully to mourn his father. Full mourning required years, including years in seclusion – not an option for a new military leader at a crucial moment.

The king’s ‘presence’ is part of a phrase also used in 37.5, 45 and 59. For more on the word used, jia 假, see LiSe and Harmen. (Google translate is quite good with Dutch!) It’s a tricky one, with its core meaning of ‘second skin’ and associations of fantasy and fakery. There’s clearly no deception involved in these phrases in the Yi: ‘the king jia has/there-is a home,’ or ‘the king jia has/there-is the temple.’ Jia seems to be a prerequisite for there to be a real home or temple. Harmen suggests this means the king places himself in the service of the home or the temple. Remembering the ‘second skin’ meaning, I imagine it as the king assuming his role, putting it on like a mantle of responsibility.

The text in Hexagram 55 is different: not ‘the king jia has/there-is [noun]’ but simply ‘the king jia it’. The king is present to it; the king assumes it; the king takes it on. Why no specifics? Perhaps because the king simply needs to be present to everything here and take it all on. Abbreviating the phrase adds to the sense of urgency.

In readings, this seems to call you into the demands of the present moment: be here, inhabit this responsibility, put it on.

Not mourning, bearing up

And also – do not mourn. Looking beyond the Zhou legend to the inner logic of the hexagram, why do we need to be told not to mourn at such a time? I think it’s because of the loss of a former life where you weren’t the one responsible. There’s a very fine line between bearing up under the weight, celebrating the abundance of opportunity to make things happen, and wanting to disappear into the mourning hut or under the duvet and just wait for it all to go away.

That fine line between bearing up, or not, is embodied in the nuclear hexagram: 28, Great Exceeding:

Here’s 55’s core awareness of stress, overwhelm, and the imperative to act. A sheltering structure – of childhood, or following, or being protected or told what to do – breaks down, and you’re on your own. (Maybe in your own city, surrounded by your own people – but still on your own.)

You can see from the texts of lines 2, 3 and 4 that Abundance is found in the dark. It’s about what becomes visible when you can’t see – especially, I’ve found, when you can’t see how but can still see why. In line 2, you find the trust to go on despite ‘doubts and anxieties’; in line 3, you realise that despite your incapacity, things are unfolding as they should; in line 4, you even make an ally of the Yi lord.

How did you get here?

From Hexagram 54, the Marrying Maiden. (And as part of some much bigger patterns – see Exploring the Sequence inside the Change Circle library.) The Marrying Maiden experiences a strange mixture of frustration and fulfilment: frustration, because she is married off into a situation she didn’t choose and can’t control; fulfilment, because she might be able to make this her home and attain her highest potential here. In the Zhou story, ‘King Yi marries off his daughters’ to ally Shang with Zhou; King Wu (or possibly Wen) will be born from this union.

Abundance brings a similar mix of experiences. There’s a similar sense of being ‘landed’ in a situation you didn’t ask for – but also the overwhelming knowledge that this is where you belong and where your mandate lies. The Sequence itself says simply,

‘Attaining the place where you belong naturally means greatness, and so Abundance follows.’

The step from 54 to 55 is also a single trigram change – from thunder over the lake to thunder arising from light:

In Hexagram 54, you can imagine the thunder’s vibrations rumbling through the lake, circulating in its currents – an acute inner awareness of the changing times. The picture of Hexagram 55 is quite different: fire powering thunder, insight propelling action… 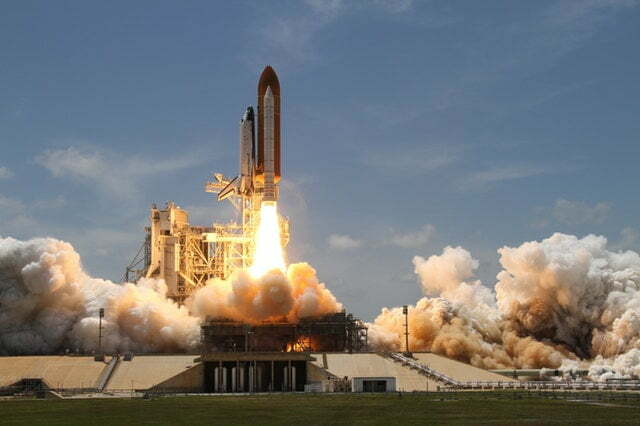 You can paint many pictures with these trigrams: the rocket launch, for instance, or lightning followed instantly by thunder when the storm’s right on top of you. This was the most important picture for the Image authors:

‘Thunder and lightning culminate as one. Abundance.
A noble one decides legal proceedings and brings about punishment.’

When you know, you act, and accept the consequences; this is not a hexagram for sitting on the fence and pondering, or keeping your options open. In terms of the simplest trigram associations, zhen above li represents action emerging from vision. In the Zhou legend, this is exactly what happened at Feng: they saw celestial omens, and acted accordingly.

This might remind you of Hexagram 49, where inner fire shines through an outer lake, and the people’s way of life is re-aligned with the stars as the noble one ‘calculates the heavenly signs and clarifies the seasons.’ After all, 55 is only separated from 49 by its fifth line, where ‘a thing of beauty,’ like a new regime and newly harmonious order, is coming.