However – of course – marriage imagery isn’t always talking about marriage, or any kind of romantic relationship. Yi can use ‘the woman marries,’ or ‘taking a woman’ to describe any kind of relationship – with a job, for instance, or a calling, a place, a school of thought, your own body, and so on.
(And since divining with Yi has always meant trusting a random process to give you the hexagram you need, hexagrams ‘about’ marriage have always answered questions that had nothing to do with marriage.
This also means that since it was first written down, the Yi has never stopped inviting men to imagine themselves in the position of marrying women, and vice versa. If you’re ever irritated by the patriarchal framework behind a hexagram like 54, it’s worth remembering that the act of divination has been confusing these hierarchies for thousands of years.)
For full description of early Chinese marriage traditions, how they’re used as imagery in the Yijing and ways to interpret and apply them in readings, see Language of Change, my Yijing glossary. In its ‘Marriage’ chapter, I walk you through…

…for marriage in general, and then for the woman’s marriage, including the ‘not robbers but marital allies’ vignette, and the man’s marriage.
In this post, I’d like just to compare two ‘marriage’ hexagrams, Hexagram 53, Gradual Progress, and 31, Influence. 31 speaks of ‘taking a woman’, so this is marriage from the man’s point of view; 53 is about ‘the woman marrying’, the opposite perspective.

‘Gradual progress. The woman marries.
Good fortune.
Constancy bears fruit.’
​
The verb ‘marrying’ here is gui, ? – the same word you find in the name of Hexagram 54, the Marrying Maiden. In addition to ‘marry’, it also means to return, come home to, belong with or converge towards, and even ‘take refuge’ in the Buddha. LiSe adds that ‘it is often used for dying: returning home.’
This is what marriage signified for a woman in ancient China: she would leave her childhood home and travel to live with her husband. And since for noble families, marriage was a means of forging alliances between different clans, she would have to travel a long way and leave everything familiar behind her.
You can see how this ties in with the other big, vivid image of Hexagram 53, the migratory geese. They have a long way to go, over inhospitable terrain (the barren ‘high mountains’ of lines 3 and 6), to reach their home. The new wife has a long way to go, even after her physical travels are over, to establish herself and be truly at home in this new place.
In readings, Hexagram 53 has to do with integrating deeply into a situation, ‘coming home’ into your own life. Running a ‘cast history search’ in my Resonance Journal shows me how it’s described…

‘Influence, creating success.
Constancy bears fruit.
Taking a woman, good fortune.’
​
The expression ‘taking a woman’ (as in Hexagram 44) is about a man marrying. It’s completely different from the woman’s experience: the man doesn’t move house, but instead courts the woman to invite her to come to him. He will need to make space for her and welcome her in – her, and the children that will follow. His life will not be the same!
In this way, ‘taking a woman’ amounts to asking to be moved and changed by something new. Your home identity will be enriched, expanded, challenged… all of which is a risky undertaking, as you can see in Hexagram 44, and Hexagram 4 line 3, and indeed in the moving lines of 31 itself. Will the change be welcome – is the ‘Influence’ moving you to a good place?
Another ‘Cast History’ search paints a very consistent picture of ‘taking a woman’ in Hexagram 31: readings about creating space for new ideas, so they can move me and create change. Space for a new vision that takes on a life of its own… for an idea I was inclined to dismiss… for music (in several readings)… for spirit, for readings… for love and its propensity to turn your life upside down… and so on.
In Hexagram 31, ‘taking the woman’, making space for the these rich new experiences, fundamentally means good fortune; in Hexagram 44, not so much. There’s a fine line between ‘expanding’ and ‘exploding’.

Here’s an interesting point of comparison between Gradual Progress and Influence: the nuclear hexagram of 53 is 64, Not Yet Across, while the nuclear hexagram of 31 is 44, Coupling.
A nuclear shows ‘hexagram DNA’, the core theme and inner work of the cast hexagram. So it might give us pause for thought that 53/54, the two hexagrams about the woman marrying, have at their core 64/63, hexagrams about a great transition, and how the journey continues afterwards. The woman marrying is still integrating into her home, attending with care to each step forward into her new place – needing to be as sensitive to the nuances of relationship as that fox on the ice.
Meanwhile, the man taking a woman needs, still, to wonder how he can find space for all this and still stay in one piece. From one of my Hexagram 31 journal entries:

It’s true that ‘The Muse’ can take over. Maybe that’s a risk you have to take, to get that power into the heart of your life? If you want to be overwhelmingly powerfully motivated, moved by real emotion, you have to let that flow.
​

Both 53 and 31 contain a ‘marriage’ of trigrams, each combining a son and a daughter of the trigram family.
Influence is made of gen, mountain, the youngest son, joined by dui, lake, the youngest daughter: a perfect match of complementary trigrams:

Both pairs of trigrams come together to paint a single natural landscape: the lake, or the tree, on the mountain. The differences are apt, though.
The mountain needs to form a crater, allowing space so the lake can gather:

‘Above the mountain is a lake. Influence.
Noble one accepts people with emptiness.’
​
The tree will root slowly into the rocky flanks of the mountain, gradually integrating and creating its own miniature ecosystem:

‘On the mountain is a tree. Gradual progress.
A noble one abides in virtuous character and improves the ordinary.’
​

If you’re interested in Yi’s ancient imagery and how it works in readings, I’d definitely recommend you pick up a copy of Language of Change – not just for the ‘marriage’ chapter, but also the sections on river-crossing, compass directions, omens and so on.
You could purchase it on its own as a pdf ebook, but it’s also included in its entirety inside the Resonance Journal. 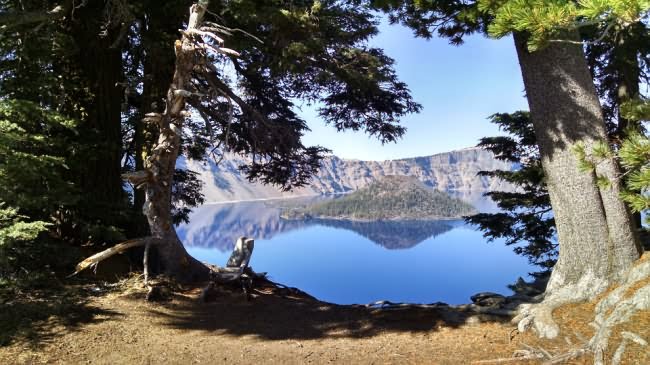 Unsolicited testimonial: Language of Change is supremely worth buying. I almost always have it open in my pdf reader, along with various other of Hilary's pdfs, and Bradford Hatcher's book.

It contains a voluminous amount of information. Plus, its structure and thoroughness teaches how to think about Yi, and how to look at your own readings. The "great person" doesn't have to be a person, for example! And since we don't have "feudal lords" in the 21st century, it helps to know they can translate to "helpers" or "infrastructure." Of course, Hilary points out the pitfalls of relying on any collection of suggestions, but when you see it as "ways to think," it's easier to come up with more of your own.

It's also a paragon of organization and thus a pleasure to use. Every little section is bookmarked, there is a ton of inter-document linkage, and there are not one, but two indexes. The multi-translation index shows how eight authors in nine books translated the same phrase (and that does make a difference sometimes). The indexed translation writes out the entire I Ching in order, every Oracle, Image, and line text, and links everything back to the glossary. So if you're working with line 7.2, you can just click on the bookmark for hexagram 7 line 2 to find all it's glossaried parts.
You must log in or register to reply here.
Share:
Facebook Twitter Reddit Pinterest Tumblr WhatsApp Email Share Link